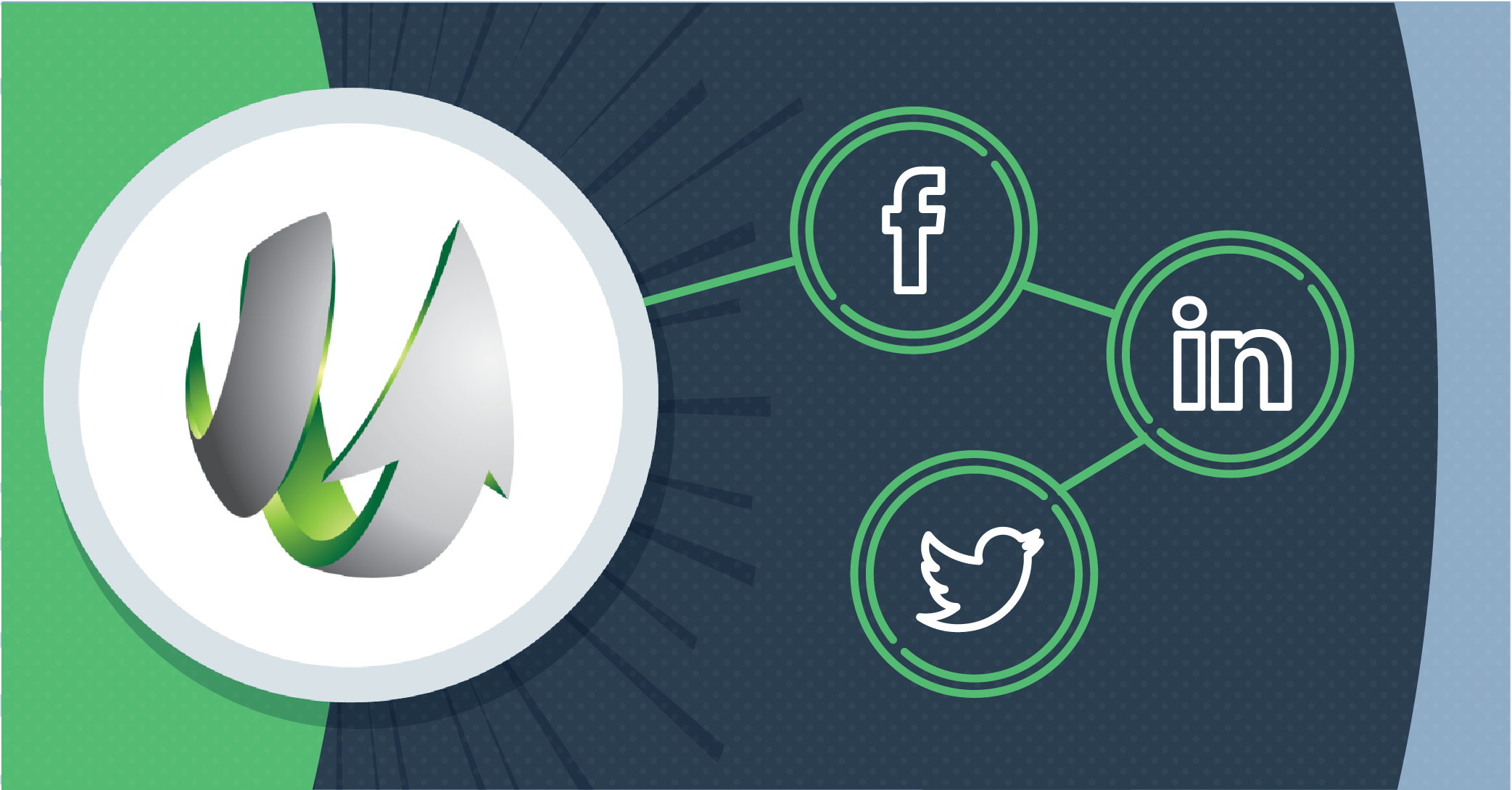 At 2 Fish Co, we use social media to show our audience what we’re up to, share interesting stories we’ve found, and celebrate events and milestones. We’d always scheduled our posts using Hootsuite or simply sent them spontaneously within each social platform. That is, until SharpSpring, the marketing automation platform that we use, launched a social media management feature in late 2017. SharpSpring Social not only allows users to send and schedule posts but also tie social media into the sales process. This blog, which we strive to update yearly, details our experience with SharpSpring Social from the very first try to using it regularly for our social presence and our clients’.

Jump right to the latest updates about SharpSpring here.

Keep in mind that this is not an exhaustive exploration of the tool’s features and that SharpSpring is still adding new features. It is also not intended to be a direct comparison of SharpSpring Social and Hootsuite, though I included some information about differences I noticed between the tools. Comparing the two is like comparing apples and oranges. SharpSpring is so much more than a social scheduler; that’s just a tiny aspect of what it offers. It is a fully built-out marketing automation platform, and with the social integration, we can create automations and lead-scoring rules based on lead interaction with our social channels.

SharpSpring had just launched its social media management integration and was asking for customer feedback. Our team tested it and encountered a few bugs and minor issues, which was to be expected. Overall, though, I was excited by the possibilities.

First off, I have to point out one huge plus of SharpSpring Social: the tool (and all related capabilities) is already included in the monthly cost of the platform. SharpSpring customers get to connect unlimited social profiles, and the number of users is also unlimited. This is a breath of fresh air compared to other platforms that tack on additional charges per user and for certain functions.

Getting into the actual interface and functionality of the platform, I immediately liked the calendar dashboard view. As soon as you enter the Content Calendar, you can see all of your scheduled social media posts, email sends, and even blog articles. This comprehensive view is helpful when you’re juggling lots of content.

It was quick and easy to connect our Facebook, Twitter, and LinkedIn accounts. However, Instagram was not integrated into the platform due to limitations of Instagram’s API (Application Programming Interface) at the time. Hootsuite also could not post photos directly to Instagram at this time, though users could schedule posts and then send them through the Hootsuite app when the time came. (Instagram’s API opened up earlier this year, allowing Hootsuite to enable direct posting to Instagram.)

I sent a post through the tool and found it to work well. At the time, I did not locate an edit function for already-scheduled posts. I also missed the drafts function from Hootsuite, which allows posts to be saved and then edited and scheduled when users are ready.

Overall, I appreciated the integration of social media management and looked forward to seeing how SharpSpring would update the tool as they received user feedback.

Approximately six months after the launch of its social media management tool, SharpSpring has worked the controllable issues out of it. In fact, it took them a lot less than six months to do so!

SharpSpring Social is an excellent tool for sending or scheduling Facebook and Twitter posts. My opinion is that its interface is more intuitive than Hootsuite’s, though it doesn’t have the same depth of features.

The “Create a New Post” window is reminiscent of Hootsuite’s Composer window. Whereas post creation and scheduling for Hootsuite take place in different tabs or areas of one window (whether using the “Compose Message” box in the upper left-hand corner or the Composer window), SharpSpring has a separate scheduling/confirmation window. Once users create a post in SharpSpring, they must click “Schedule Post” to confirm and schedule. This takes them to the new window, which shows a preview of the post and allows them to easily see which of the three platforms their post will be sent to. Hootsuite does show post previews when using the Composer window, but it does not have a similar confirmation window before sending or scheduling. This hasn’t caused any problems in my experience, but I appreciate the verification SharpSpring provides.

Once a post is scheduled, you can see it on the Content Calendar. SharpSpring added an edit function for already-scheduled posts, so it’s easy to click on one and make any necessary changes. You can also click on a post that has already been scheduled or posted and copy it if desired. There is still no draft function, so I submitted a feature request to SharpSpring.

While it’s easy to post to Facebook or Twitter through SharpSpring Social, the same cannot be said for LinkedIn. LinkedIn’s API constraints prevent images from being sent through SharpSpring, which is an unfortunate downside. A workaround is available; you can upload an image to SharpSpring’s Media Center and include a link to the Media Center asset in your post. Hypothetically, the intended image will populate from the link. I ran into some issues with this.

When I first tried to post an image to LinkedIn using a Media Center asset, it ended up looking like this. Not exactly what I was going for!

I’ve discovered that this workaround only functions if the image is sized correctly and if I do not add additional links to a post in which I’m using a Media Center asset link. Once I removed the link to the 2 Fish Co. website in the example above, the image populated from the Media Center asset link. The actual link does show up in the post, but SharpSpring automatically shortens it so that it’s less of an eyesore. You can also manually shorten it using a tool such as bitly.com.

When I brought the issues I encountered to SharpSpring’s attention, a representative told me that LinkedIn recently updated its API and that SharpSpring is looking into the feasibility of enabling direct posting of images to LinkedIn.

While Instagram is still not integrated, SharpSpring has confirmed that they are working on it now that the platform’s API is more open.

Another important update to SharpSpring Social is the incorporation of a social listening feature. Reminiscent of Hootsuite’s interface and “Streams” page functionality, it was a welcome addition! It allows us to monitor interactions with our pages and keep track of trends.

Still the most exciting and differentiating factor, in my opinion, is the ability to create automation and lead-scoring rules based on social interactions. While we haven’t taken full advantage of this functionality yet, we look forward to testing it out and seeing how it helps us generate and interact with leads as well as measure the effectiveness and ROI of our social media efforts.

It’s been a year-and-a-half since we updated this review, and a few things have changed since then.

SharpSpring has continued to refine its social tool, and we now feel comfortable relying on it for scheduling client social posts—with some caveats. Of course, we can only schedule to Facebook, Twitter, and LinkedIn, so we still use Hootsuite for Instagram post scheduling.

The interface, both the content calendar and streams page, has remained the same since our last update. We still appreciate that it’s uncomplicated and not cluttery (as Hootsuite can sometimes feel). However, it still feels as if it is still not completely built out. Some features that would be intuitive and are commonplace in other schedulers (like a drafts function) are still missing.

Here’s the big change since our last update:

Posting an image with a LinkedIn post through SharpSpring social is now simple. That’s been a huge plus, since the workaround used to be annoying and not very effective.

Here are things we mentioned last time that have not changed:

SharpSpring has informed us that Instagram integration is on the roadmap for early next year. We’re still holding our breath.

It’s just a “nice-to-have.” If we’re waiting on a final post graphic, or final approval, we could get a post queued up to schedule once ready.

No warnings about large images.

SharpSpring does not have a warning for oversized images like Hootsuite does! We uploaded an image for a social post that was a bit oversized, and the caption was posted WITHOUT the image. Yikes. Be sure ahead of time that your images are right-sized for each platform.

If the user account that linked up a social account with a SharpSpring instance is deactivated (i.e., after a personnel change), all of the social accounts they linked will then be disassociated. We had NO IDEA this would be an issue and were confused when posts weren’t sending. This does not make sense to us, as we believe the accounts should be associated with the instance and not the specific user who connected them.

Can’t stagger times on a multi-post.

While we like that a post can be scheduled on Facebook, Twitter, and LinkedIn simultaneously (and that the image and caption can be tailored to each platform), it would be great to be able to update the send times on an individual basis (i.e., so posts can be sent at the ideal time for each separate platform).

There’s really no reporting on social success within SharpSpring Social, other than conversion tracking through campaigns. While this is the most vital metric to track regarding social, it’s also necessary to track engagement numbers to see what’s resonating with your audience. We continue to rely on Rival IQ for our social analysis and benchmarking.

An approval function would be an amazing addition, especially considering SharpSpring’s agency focus. Clients could give posts a final look before scheduling if they desired to do so, and we could also use this function internally to double-check our own scheduling.

One of our favorite features of Hootsuite’s scheduler is their in-app image editor and resizer. While we don’t see this being on SharpSpring’s list of updates anytime soon—if ever—it would be a helpful addition.

Overall, SharpSpring Social is a well-rounded tool that complements SharpSpring’s overall functionality. The rate of improvements has slowed, and SharpSpring Social is now relatively established. We know we can count on it for basic social post scheduling on Facebook, Twitter, and LinkedIn. There are certainly areas in which its features could be strengthened, but we think it is a definite value-add for users of the platform or anyone looking to dive into marketing automation!

I’ve been thinking about space for a long time. As a kid, I wanted to be President of My Own Business. My grandfather ran the family business in Portland, Oregon. I admired him so much, so it made sense to follow in his footsteps. As I grew older, I never really let that vision go. […]

It’s Time to Break Up With Organic Social

It’s not us, organic social media, it’s you. We’ve offered organic social media support since the early days of our agency. It has been a foundational digital marketing tactic for ages, so much so that what we’re about to suggest might seem blasphemous. It’s time to break up with organic social. Here’s why we won’t […]

Stay up-to-date on the latest news from 2 Fish Co!