We are not resigned to the Great Resignation 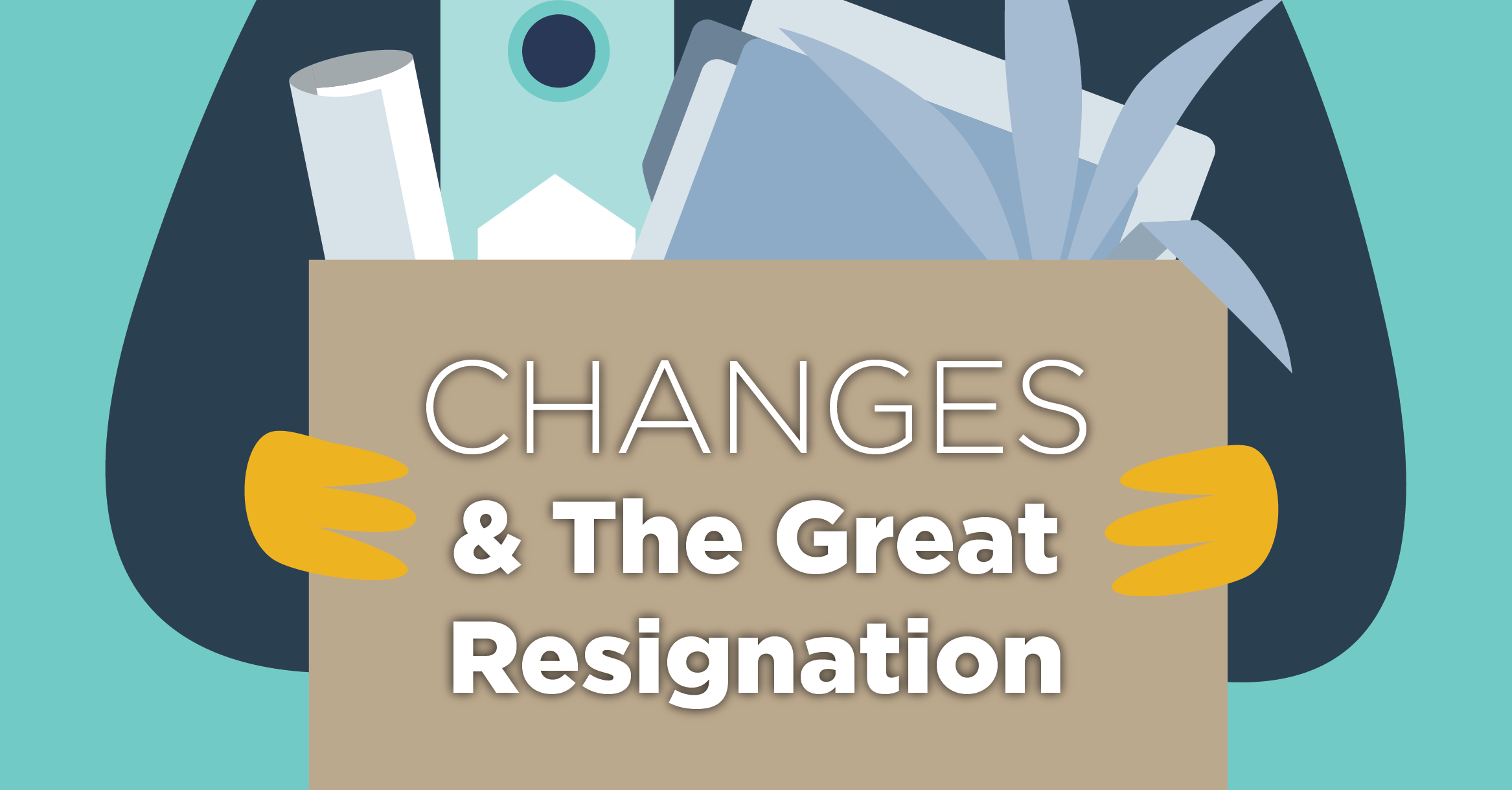 It’s the end of the world as we know it…

Coming out of the spring and into the summer this year, our advisors had been warning us for months: “be prepared, a wave of resignations is in the works, and you won’t be able to escape it.” They espoused methods and approaches to retain employees and reminded us that employees have notoriously short memories: mere months before the same employers were bending over backward, along with the federal government, to retain jobs that were at risk due to the global pandemic. They had solid ground from which to make their dire prognostications; in August of this year, the Bureau of Labor and Statistics released a report indicating that 4.3 million Americans quit their jobs. That number increased to 4.4 million in September, and while the official numbers have not been updated, there is a strong sense that the employment crisis will continue. This massive employment sea change is inescapable and unavoidable.

The reasons are myriad and understandable; people are leaving for more money (up to 30% increases in wages), more flexibility, and more happiness. That’s right, people want to be happy in their work!

So, we set out to do just that.

One of our first goals as employers was to ensure that our employees received more than just a “living wage.” Since the Great Recession in 2008, that standard has been eroded by employing people for less than full time to avoid having to pay benefits. The end result is an increase of over 7%—averaged over the past twenty years—of people who hold down two jobs to make a “living wage.” We knew from experience that making ends meet is a miserable experience, and far from the happiness that people seek. To that end, we have worked to ensure that we provide wages that exceed the low-income threshold, adjust for cost of living, reflect experience, effort, and merit, and include benefits such as healthcare, life insurance, and retirement contributions. And to be sure, this isn’t a self-aggrandizing feel-good list of benevolences designed to showcase how great we are as employers. Many other employers do much more, including providing on-site childcare, laundry service, cafeterias, and massages. Everyone watched Silicon Valley, right? Sometimes, the best extras we can muster include a reasonably stocked snack drawer.

We have also worked diligently to create a culture of engagement and encouragement. We work hard to understand each other: the way we gather and deliver information, our individual work rhythms, the spaces we work in. All of that is under constant examination and adjustment. Why? Because there is always a better way, and the way people work today is not the same as the way people worked twenty years ago. At one point we accepted cubicle farms (anyone remember the film Office Space?) as a legitimate way of organizing workgroups in spaces. But as work and life continue to blend, we’re developing flexible spaces that allow people freedom of movement. Remember, people want to be happy in their work!

One beautiful October morning, one of our employees asked to meet with us. We had just finished review season and expected that there was a need for clarification or additional questions. What we encountered, however, was a tearful resignation. Despite our best efforts, which were greatly appreciated, this employee needed to move on. The exit interview confirmed that the environment and culture were consistent with what was described above and that this person was really torn about leaving. It was that good of an experience for them. But they needed change, and our employment was one of the things to change for them.

And then it happened again, a week later.

This second employee needed change as well. The conditions were ripe to seek out a different aspect of our industry that we simply couldn’t provide. But our culture and environment, our salaries and benefits were not to be disparaged. We had done this person right. Two people leaving in the space of two weeks was extraordinary, but we all took it in stride. Change happens, especially in the marketing world. I’ve always planned for 3 to 5 years per employee. If they stay longer, we’re really doing something right for them.

And then it happened again, a week later.

We were stunned. Shelly and I took a long walk and decided to reassure both our clients and our remaining employees that we were going to be ok. That work would still get done, that we’d all have to work a little bit harder, that we’d bring in help and start interviewing right away. When we shared our extraordinary changes with our clients, with no lack of trepidation, we were met with an incredible amount of empathy and understanding. Our clients have been incredible and reassuring. We are all in this together.

And that’s when it dawned on us. It’s not enough. We are in an era of extraordinary change that no employer is immune to. One change at one corporation can have ripple effects down and across the connected economy. Corporation X has an internal marketing need and has enough buying power to move people out of an engaging and nurturing culture that is loved by all. Just not enough to pass up a 30% raise.

And we couldn’t blame them. Of course, you take the 30% raise, or more autonomy, or the change you need to promote happiness. We miss these folks greatly, not just because our workload has increased in the interim, but because they are great people and we loved working with them. And we wish them all the best and much happiness.

So, if good wages and decent benefits and great culture isn’t enough to retain people, what is? The answer of course, is nothing. That’s perhaps a tad bit pessimistic, I realize, but hear me out.

Their working conditions change, their life conditions change. Their responses to these conditions change. We have entered a global pandemic that was only ever thought of in the context of science fiction but is now lived fact. We worked hard to hew as close to each other as possible under extraordinary circumstances. We attempted—and continue to try—to understand how to operate in this new mask-covered world. And something must give, and for millions of Americans, the answer has been their job.

Back to life (however do you want me)

As we have been interviewing our incoming teammates, I’ve been struck by the depth of the questions being asked. People want to know what we mean when we describe ourselves as having a “hybrid work environment.” When we explain that it means we work best when we can be together as much as possible, but that sometimes we need to change our environment to become more focused or productive, or to meet the myriad needs of our personal lives, the relief is palpable. Not that we allow people to do what they need to do where they need to do that—this is now an expectation, not a nicety—but that we express that community fosters creativity. That we’re working to establish and maintain connection.

One of our core beliefs is that relationships matter. And more than ever, this resonates with people. So, while we understand that we’ll need to adjust salary expectations all around, we have been reassured by those leaving and those arriving that culture is important. That taking care of one another is not a lost art, but an emerging expectation. That we all seek happiness.

While there is no antidote to The Great Resignation, there is an answer. People change. Organizations change. Embrace it, and embrace each other.