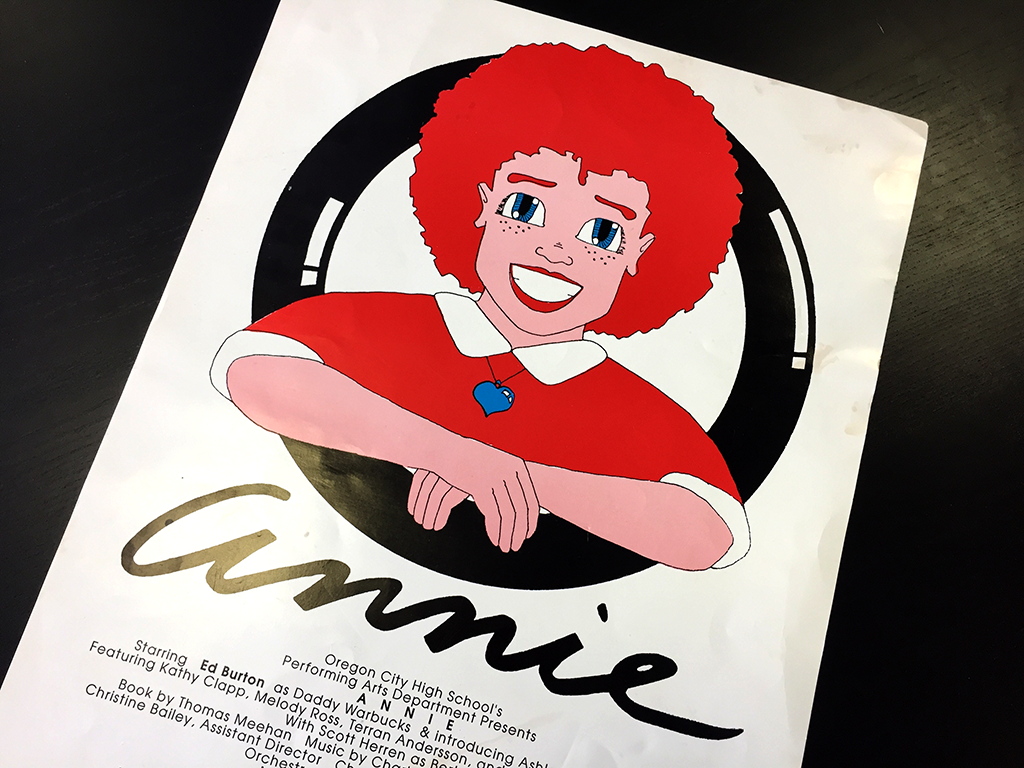 It was the Winter of 1989. Not a long, dark winter by any measure, but for a senior in high school that was easily bored, it was long enough. Rehearsals were in full swing for the Spring musical, Annie. I had auditioned and won two roles: President Franklin Roosevelt (a lifelong hero!) and Bert Healy, radio announcer and spokesman for fine toothpastes. You’d think that getting prepared for two roles-singing parts no less-would be enough, but I still had energy to burn and a lot of down time at rehearsals as others occupied the stage. That’s when we hatched the plan.

My friends Wendy and Shayne were in the show with me, and we were all sitting about waiting for our turn on stage, jawing about this and that. Our friend Christine, the Assistant Director told us that publicity was needed for the show, and I knew there was a history of creating posters and mailers for productions, having silkscreened a couple of posters for prior events in my graphic design classes. But this! This was an opportunity! The chance to run all of promotions! The three of us gabbed about it all afternoon and on the way home. We’d decided that we needed to call ourselves something. A name for the “company” of sorts. Shayne threw out Three Dog Night, but I argued that name had already been taken. Off the top of my head, I tossed out “2 Fish Company.” It was just the sort of absurdist nonsense that appealed to 17-year-olds, and it quickly stuck. We pressed our friend Michael into illustrating the poster, I hand-rendered an Annie logo, and we were off.

The show was a success. I still have my Annie sweatshirt, and my parents still have the poster hanging in their family room. That original 2 Fish gang split up, of course, and headed to college. I went to Calvin College (sight unseen-can you imagine today?) in Grand Rapids, Michigan, with the intention of transferring to the Art Institute of Chicago at the first opportunity. But I fell in love with my school, my professors, and my community. I was a Calvin Knight. At Calvin, I had the opportunity to study under some incredible artists, teachers, and humans. Chris Overvoorde taught me that I was already a graphic designer by nature, and to nurture my fine arts abilities to round out my skillset. Anna Gredanuis taught me to pay attention to my instincts and let go of the restrictions of “what should be” and concentrate on the freedom of “what will be.” Charles Young defended my slow, deliberate pace and encouraged quality over quantity. English professors honed my critical thinking skills and made me a better writer. Philosophy professors encouraged thinking about the wide nature of everything in order to better understand the narrow aspects of something. Liberal Arts made me a better man.

After I graduated, I worked as a film lab manager, taking in rolls of 35mm film daily, processing them and printing up 4″x6″ images of peoples’ lives. (These days, we just look at images on our screens, but there was a time that we had to be really deliberate to review our personal histories.) Being a recent grad, I was as poor as could be and wasn’t making ends meet with art shows in coffee shops. I dusted off the 2 Fish Co. moniker and went to work as a freelancer, to make a little money on the side. That led to a gig in the ad department at Meijer corporate, and then finally into a long career in advertising and marketing.

The last time I worked for someone else was at Pivotal Communications in Kalamazoo, Michigan. I worked under and with John Sadowski, one of the best mentors I’ve ever had. There, the lessons that I was taught in school were reinforced by real world experience. Patience and compassion were expectations. Excellence was the only acceptable standard. Pivotal had to close its doors in 2011 after the great recession of 2008 had finally taken its toll on the company. John, as always, displayed great grace and humility as we all parted professional ways. Later, he became my first client at the new 2 Fish Company. After being laid off, I decided it was time to step out on my own. There was but one name to incorporate under, and I filed without hesitation. But I wanted to make sure my motives were right, and I once more spent some time thinking about that name. Sure, it was a clever nod to the absurd humor that I loved so much in high school, but it was clear that there was a greater story that I’d not tapped into just yet.

Let me tell you one more story: “The secret history of 2 Fish Company.”

There once was a super popular motivational speaker/life coach/messiah named Jesus. He had a way with words and was very charismatic. He had been traveling around, teaching his “good news” to anyone who would listen. He built an entourage. He made enemies. Some folks scoffed, rankled by the new approach to old thinking. Others, many others, liked what they heard and felt hope for the first time in a while. One day, one of his speaking gigs sort of got out of control. More people were there than anyone had realized, at least 10,000, maybe more. As good as Jesus” entourage was, they had failed to anticipate any catering needs, and the crowd was hungry. Real hungry. The entourage, anxious and uncertain over what to do, went to Jesus and explained the situation. Jesus remained calm, listened and began to act. He went to the crowd, surveyed it, and found a young man who was smart enough to have brought his own lunch. “Would you be willing to share your lunch?” Jesus asked him. The kid probably responded with an “I guess so,” and with that Jesus went to work. He took the boy’s two fish and five loaves of bread and split them up, giving some to each member of his entourage to distribute to the hungry crowd. The fish and the bread fed everyone, with more to spare after all had been served. It was, as they say, a miracle.

It was a miracle of creativity and problem solving. Jesus took the available shared resources, augmented them, and made them more and better. And that, my friends, is what 2 Fish Company is ultimately driven to do. We work with people in need-marketing managers, and presidents of companies, and anyone, really-who have a job to complete. We take their resources and our capabilities-design, strategy, marketing automation, whatever the job requires-and make miraculously creative things happen. I couldn’t have anticipated what 2 Fish Company would ultimately become. Sure, I’ve had an idea for decades as to what I wanted to do, but by leaning in on the miraculous abilities of those around me, by allowing myself to be shaped by creative thinking and compassionate living, 2 Fish Co. has been able to grow and flourish. And our goal is to help our client’s businesses do the same.