What Do Fish Say to Us? 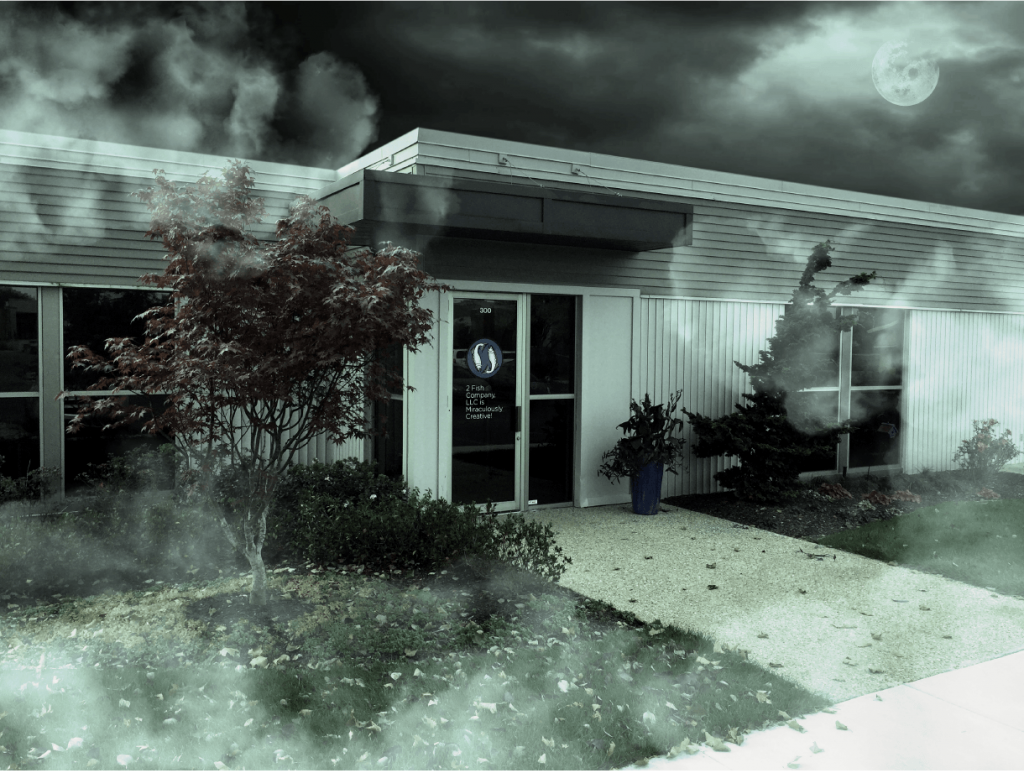 It was a warm summer night. The sun had already set, but there was still just enough light to see where we were going. Jacob and I had just gotten back from a selfie station event in Kalamazoo, and, after multiple navigational mishaps, we had finally arrived at the office.

No one had been there for hours, and everything was dark except for the spotlights shining on the 2 Fish Co. logo. A logo that stared into the depths of my soul. I stared back—paralyzed. Jacob, after an eternity, finally unlocked the doors and turned the lights on. The fish were no longer scary. As we started moving the selfie station back into the office, I was still recovering from the fright I had with the fish. I had my first visit to an office after hours, and I did not enjoy it.

The experience got me thinking, though, about all the terrifying possibilities for horror in the office. Do the ghosts of relationships past seep through the narrow walls between the couples therapy office and ours, haunting us with their arguments? If you say “Scott Millen” three times into a selfie station, does he magically appear? Does the zombie corpse of the baby bunny that Noah Millen ruthlessly (and accidentally) stepped on wander the lot, searching for a vegetarian’s brains? Why is Martin so talented with an X-ACTO® knife? Are the two goldfish secretly alien masterminds? Are we just a part of their experiment?

Nothing could stop the endless train of thought-provoking questions as I drove along country roads, in the dark, alone.

This happened a couple of months ago. But now, as the season of spook falls upon us, it’s coming back to me in a flurry while I sit in my dorm room, staring at the padded pipes running two feet above my face. I finally understand why that logo stared so deeply into my soul: it was telling me something. Something useful. Something deep. Something meaningful. Something completely unexpected. It changed my world, and for the better. I don’t think I’ll ever forget those two words. The six syllables. That snarky tone.

You see, one thing I learned at 2 Fish Co. over the summer was that adults aren’t scary. I grew up with Twitter, with Instagram, with Snapchat—my generation was the one that got out of Facebook because that’s where all the adults are—worlds where you are constantly taught that adults think you’re stupid, so you should feel the same way about them. 2 Fish Co. changed that for me. The people who work here don’t see me as less-than because I’m just a child, they see me as a person that’s capable (or at least semi-capable) of doing my job.
Over the summer I had the chance to talk with the people here. I made jokes, they pity laughed. They made jokes, I pity laughed. I got to know Martin’s life journey. Lisa’s obsession with pugs. The torturously delicious smell of Adam’s lunches. I developed relationships with the people who worked at 2 Fish Co. because they talked to the guy who painted walls and spent days organizing the closet.

So, as I remember that haunting stare from the 2 Fish Co. logo and my curiosity about why Martin really is that good at handling an X-ACTO knife comes back, so does the memory of Kim’s Hawaiian pizzas, and my fruitless attempts to convince her that they are disgusting. With the gift of time, I realize what Shelly’s favorite part of the job really means, and why she loves it so much.
Those two, snarky words the fish said to me that night?