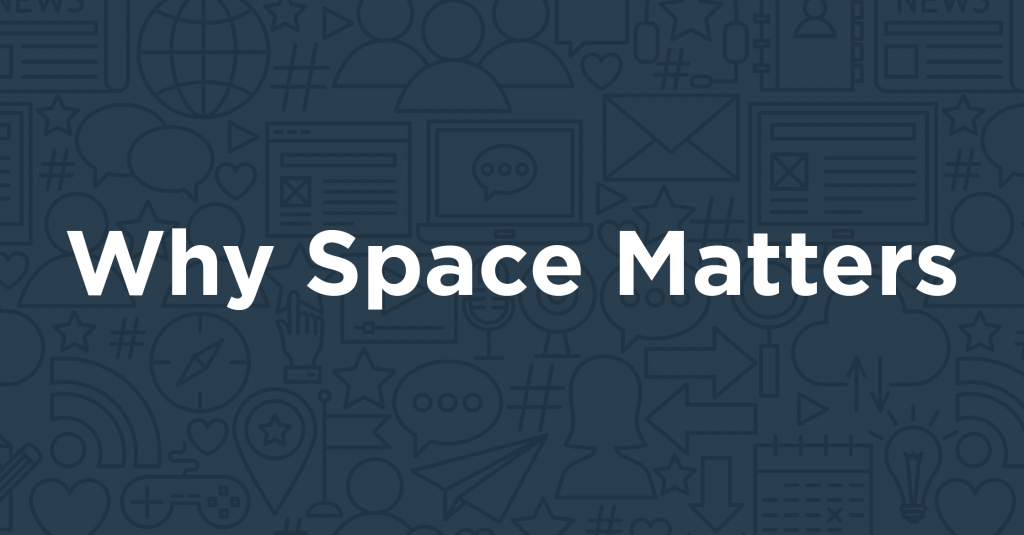 I’ve been thinking about space for a long time.

As a kid, I wanted to be President of My Own Business. My grandfather ran the family business in Portland, Oregon. I admired him so much, so it made sense to follow in his footsteps. As I grew older, I never really let that vision go. I knew instinctively that I would not run the family business but rather start something else. Something creative! I would spend time daydreaming about what that space would look like. It would be a creative space, where people could get stuff done yet have fun at the same time. There would be private offices so that you could step away from the glorious chaos of creativity if needed. And there would be conference rooms, because important things happen in conference rooms (or so I thought). There had to be a kitchen, and there definitely needed to be bathrooms. These rooms all surrounded the heart of my “perfect creative space”: the Playroom. In that space, desks would be on wheels, and there would be basketball hoops and video game systems and Lego® and PlayDoh® and comic books, because creative people like that stuff. At least, I did. I still do.

This is what my creative office space design was like when I was in my tweens. 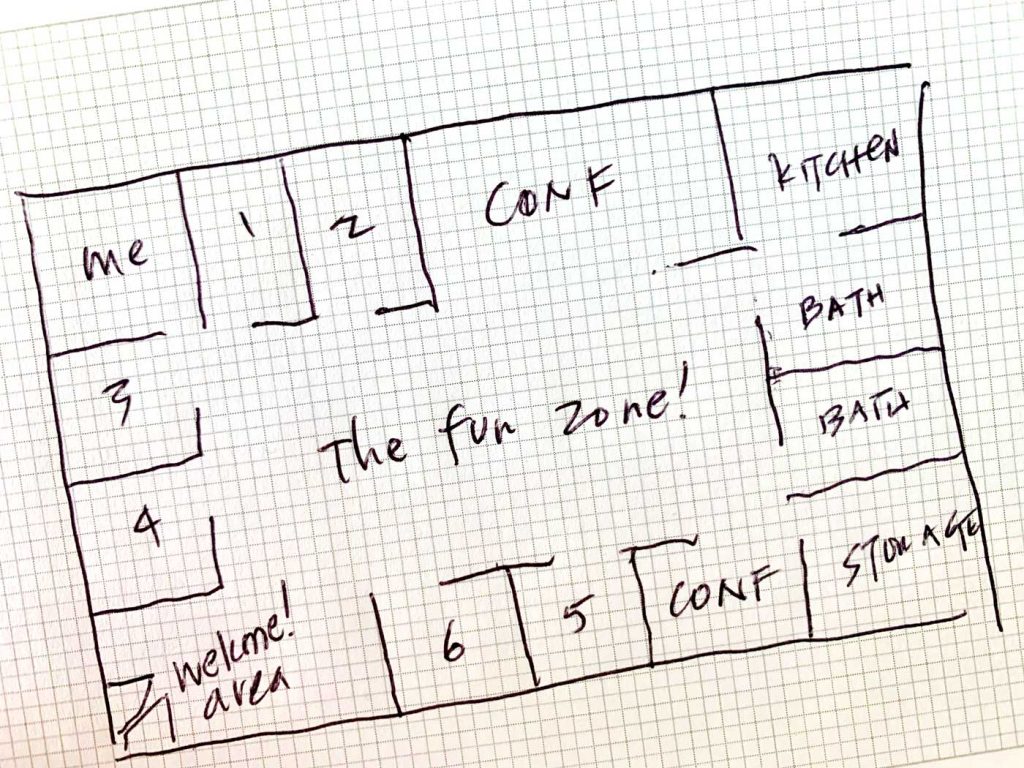 Turns out I designed the office of the future. I should have patented it.

It turns out that my space concept was nothing revolutionary, as countless creative spaces have been developed since my juvenile musings, and they all share one thing in common: a place to play.

The notion that creatives need a sanctioned play place isn’t all that revolutionary, but it is interesting to note that I instinctively knew that at such an early age. This likely stems from some of my early creative processes. I would take a notepad and pencil with me to mow the lawn, for instance. My mind had the time and space to wander while I did mindless activities. I could jot down all of the brilliant ideas that came my way. I often sketched and wrote comic book scripts at my drawing table before tackling essays at my grandfather’s desk. I paid careful attention to how my bedroom was laid out so as to create a work area and a relaxation area. Looking back, my folks must have thought I was nuts or neurotic.

These days, I shout out to Siri when I’m in the shower, because I’ll come up with a headline or layout or an entire cohesive thought and need to record it. I retreat to my office to “get work done” and join the creative team in the conference space to work through ideas together. The point is, space matters. And for a creative marketing agency like ours, space matters quite a bit.

Do a Google search on “marketing agency interior design,” and you’ll get a stack of images of great spaces designed to inspire, motivate, and cultivate cooperative work. Open workspaces abound. Conference rooms are big, bright, and often closed off by glass partitions so that the people inside can be seen but not heard. The open office as a practice has been a standard since the late ‘70s and early ‘80s. The idea was to foster creativity and collaboration. But the open office never achieved that goal, and it is now being phased out. What went wrong? From a non-scientific perspective, open offices failed to understand that some activities need privacy, and others company. My little sketch from years ago was spot on! So, how did we solve this problem at 2 Fish Co? I’m so glad you asked!

My first office was my 100-year-old home’s unfinished basement, which is a required element of a start-up story. I used to have video calls down there, and the camera would point towards the narrow, high window, making it appear that I was in a prison cell to the person on the other end of the call. Later, we moved into a room of a converted high school. It had all sorts of charm, with a long blackboard and great windows. But we began to grow, and soon we had to move again. Our next office was 1,400 sq. ft. of open space with a kitchen. It was amazing to have that much room to expand. We bought a half dozen IKEA® Bekant desks and were off and running.

Soon, however, we ran into the inherent flaws of the open office system. It was impossible to have a meeting without including everyone. And privacy? Forgetaboutit. We’d often hold meetings in the back common hallway, but then we would annoy other building tenants with our impromptu hallway takeovers. And then there was the personality issue. Shelly and I tend to be high-energy, constant movement, loud-talking folks. A majority of the team, however, are heads-down, contemplative folk. We stressed them out. They confused us. Something needed to change.

So, we moved. Really. Space was an issue, and the use of it is critical to the way we work. We found our current digs with the help of a commercial realtor, and it’s a beautiful space that’s shockingly close to my vision of a perfect space. We used the architectural diagram to preplan the usage. The primary goal was to separate the loud folk from the quiet folk. We created a “front of house” arrangement wherein the creatives could separate themselves from conferences and the business of the company could be conducted in offices. And we named our spaces. While this is a funny and absurd business practice, it does have a practical purpose: you know where you’re going by the name of the space. Plus, we wanted to lean in on the emotions associated with names. Each space is a room you’d find in a home. We figured that since we “live” here forty-or-so hours a week, we should feel comfortable in every way possible. 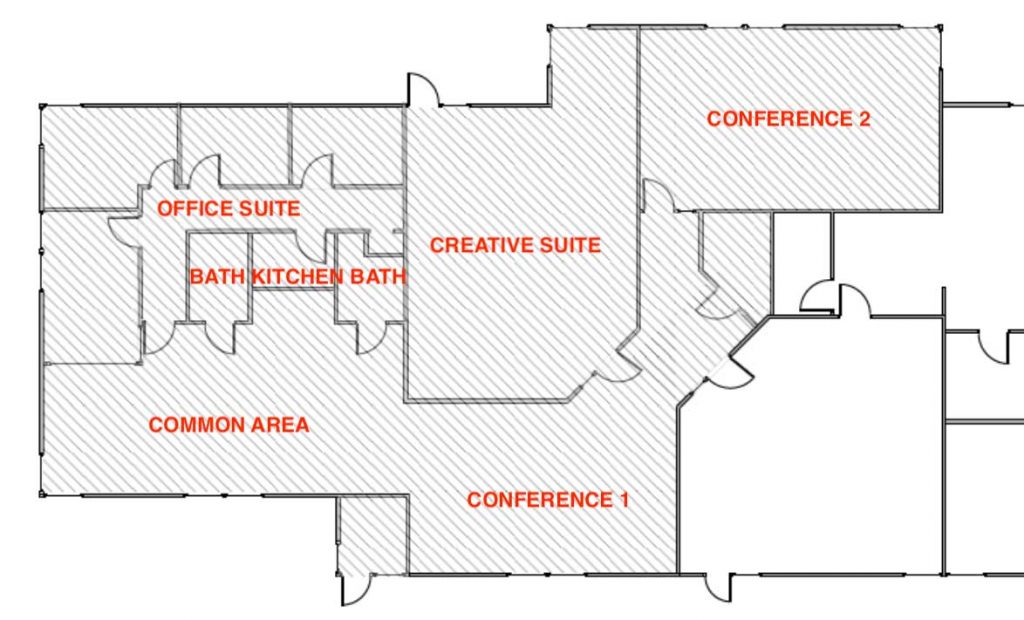 We used this diagram to plan our space. While we started out organized in this fashion, space usage needs continued to evolve. We thought we’d use Conference 2 as overflow and training space for some of our clients that have sales teams. Instead, it’s become our “garage” and is used to store stuff and act as a photo studio or conference space. 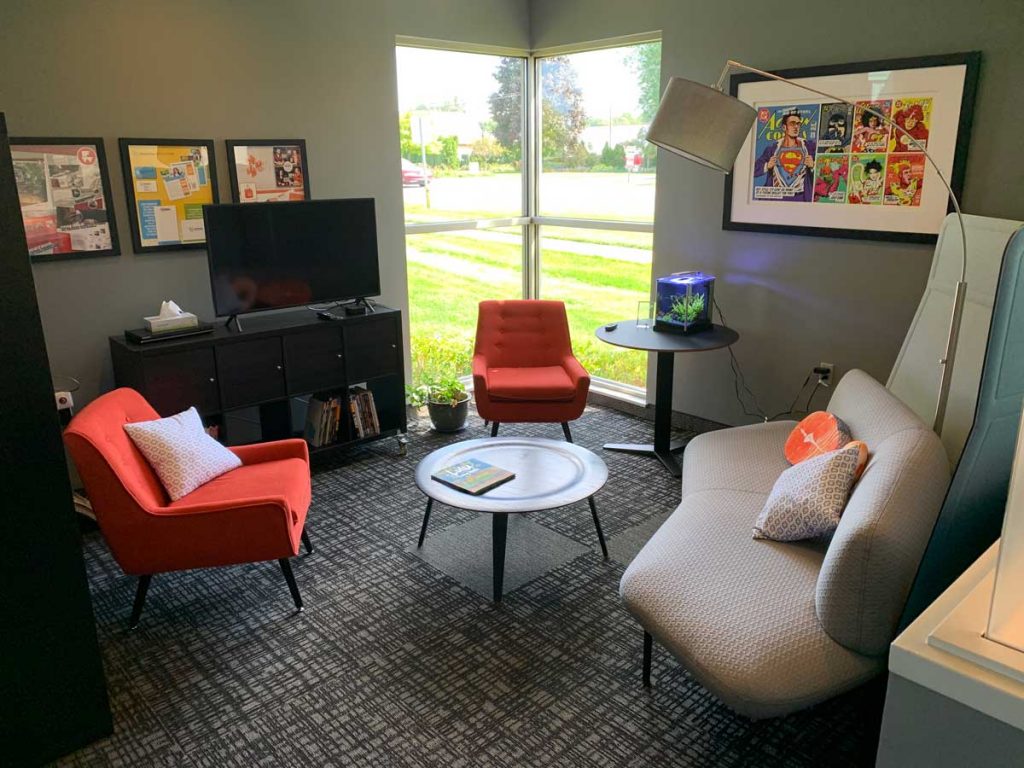 This is the Living Room. It’s intended to recreate a familiar and comfortable home space with some of the same amenities. Our displays are all connected and powered by Apple TVs so that we can easily share our screens with each other and clients. There’s a Nintendo® Switch® that is surprisingly never used. And a salmon fillet pillow. 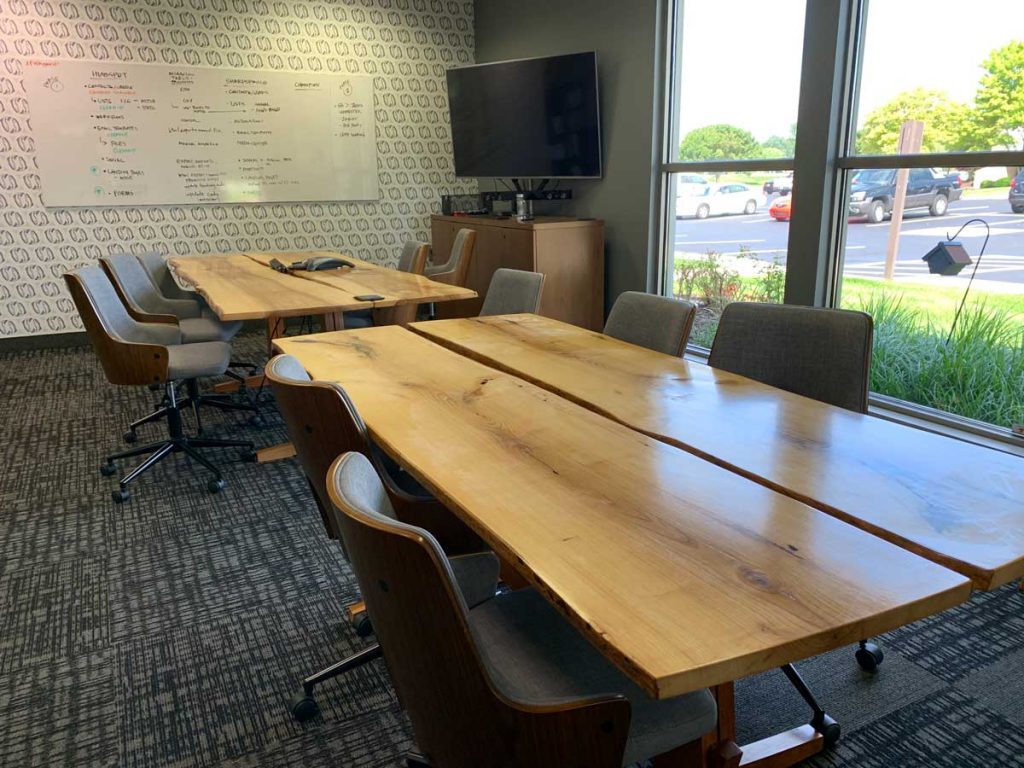 This is the Dining Room. You know how all the good conversations are had and important decisions made at the dining room table? Well, we wanted to capture that. This is the largest open space in the office, and everyone has to go through it to get anywhere in the office—just like home. Our tables were custom-made for us. 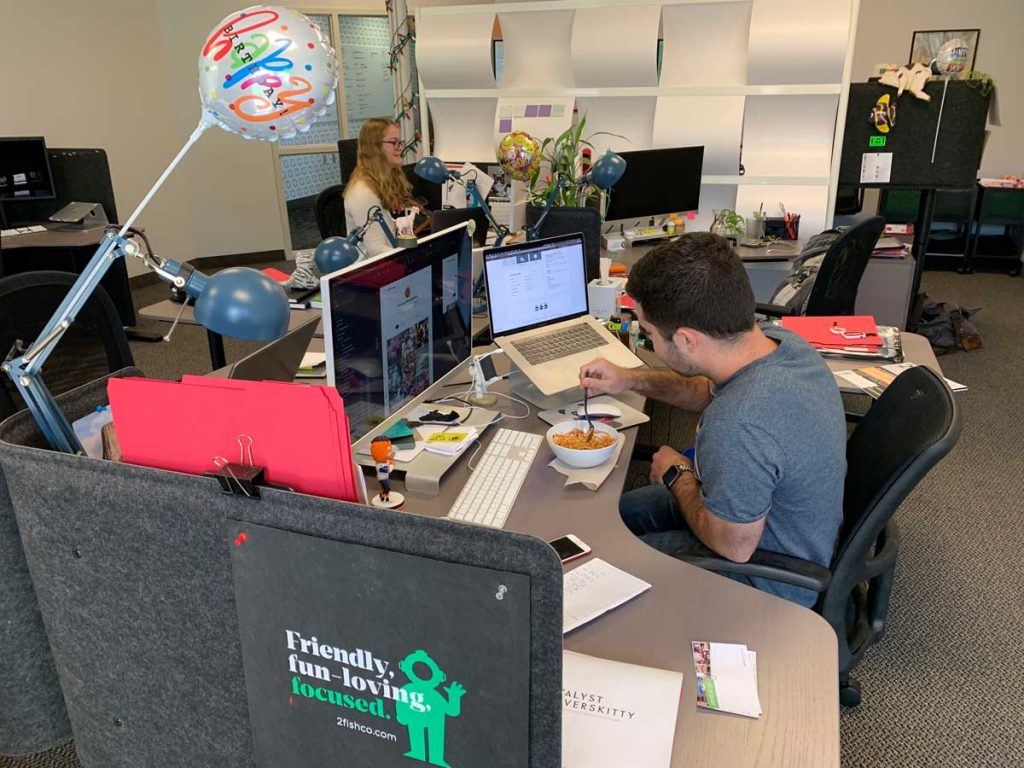 Enter: The Swamp. If it were me, I’d have called it the Playroom, but the strange shared obsession with Shrek prevailed. While the space is open, we use dividers to create a sense of separation, which has turned out to be fairly effective. Behind that screen are our Relationship Managers. In this photo, Adam is eating his lunch, which was probably pretty good. Andrea is actually working, which we’re all so grateful for. Someone has to. 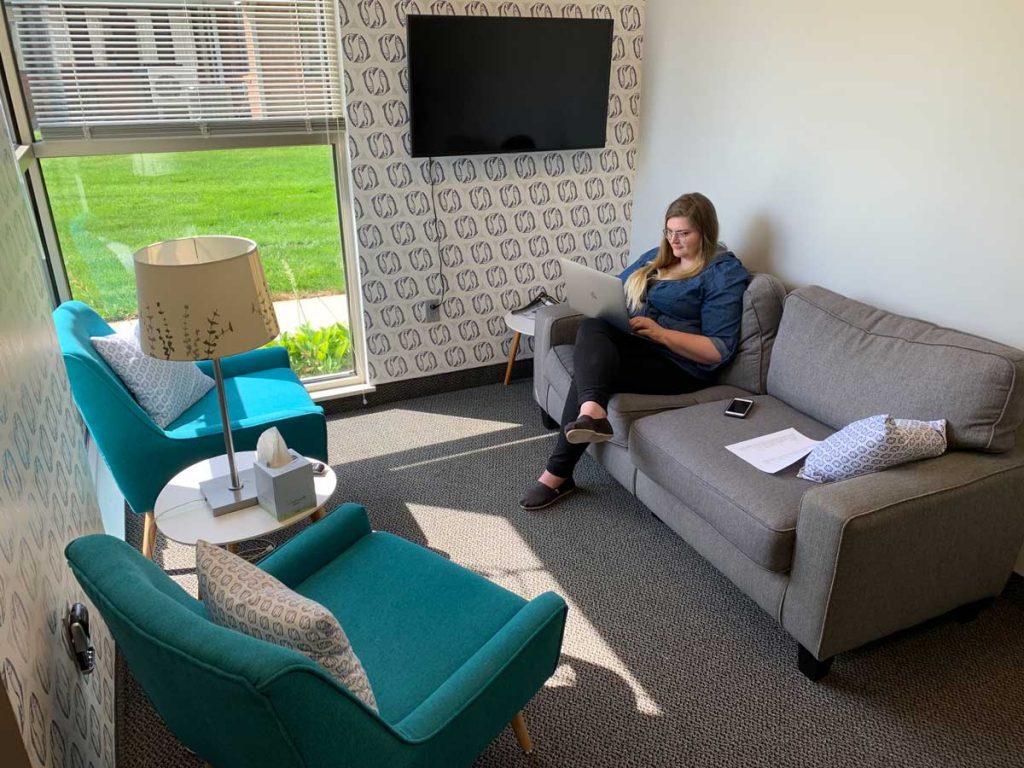 The Swamp has a nice little nook that was perfect for more relaxed seating. The creative team does SCRUM in this space, which has also become Lisa’s de facto office. The idea is to create multiple working spaces so that folks can move about, retreat, and reenergize. 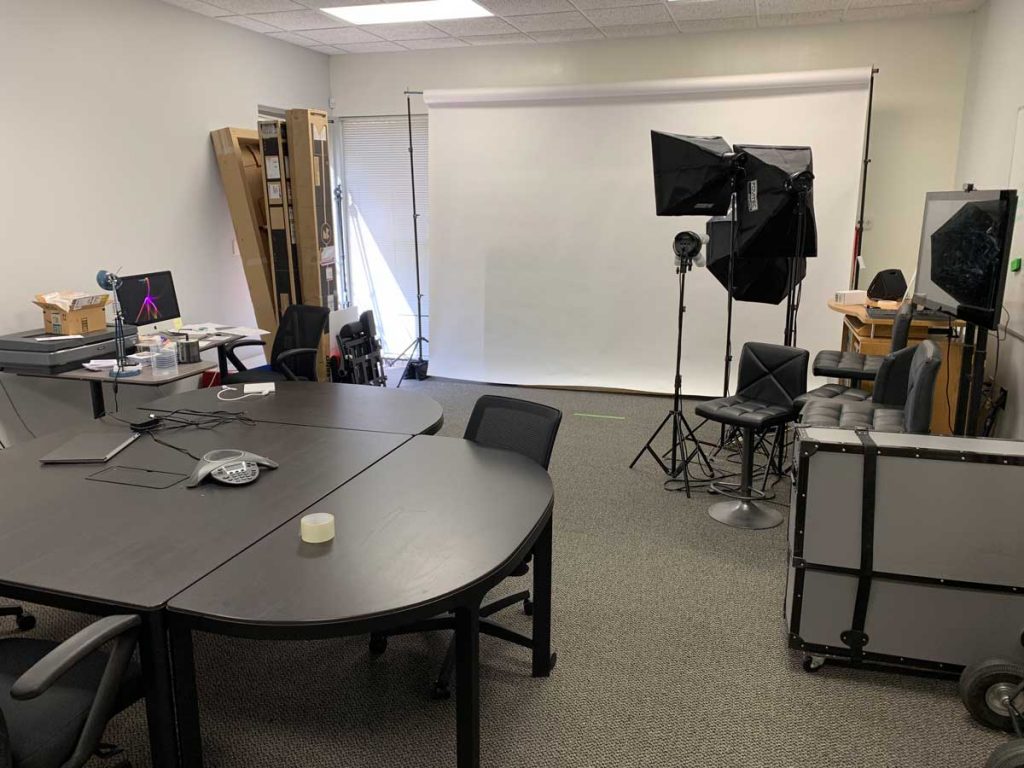 The Garage functions in the way many family garages do, not as a place to park a car, but as a flex space. Here we store our big stuff (and Scott’s way-too-large-for-home comic book collection), house an additional conference table, and shoot our in-house photos and videos. The back wall is one huge whiteboard for those times when you need to play a game of Giant Hangman. 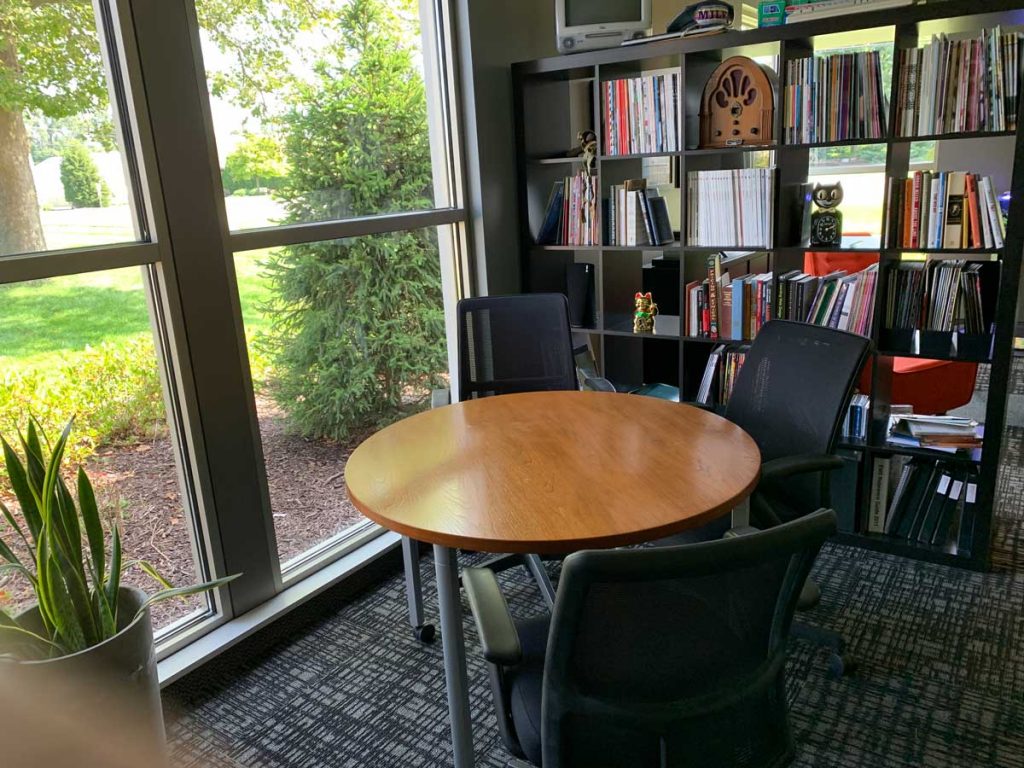 This is a part of the common area that we call the Kitchen. It’s a great place for lunch (look at all that natural light!) or for a one-on-one meeting. Plenty to read too! 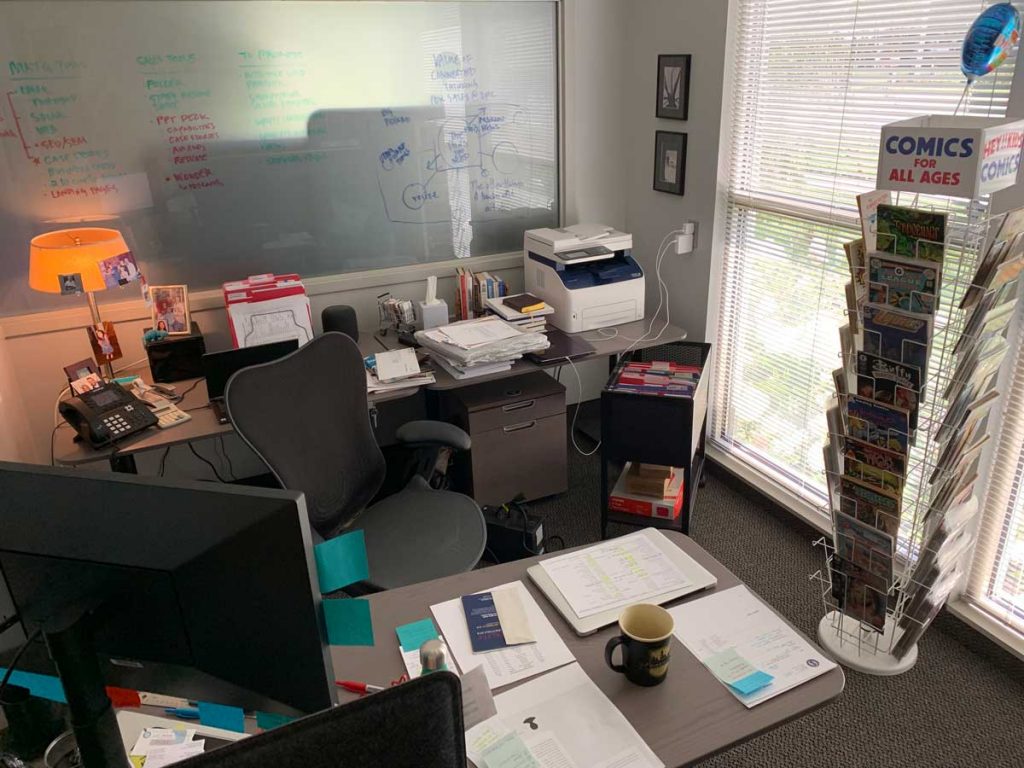 This is Scott’s Room. We named each of the smaller offices after bedroom spaces. They’re all roughly the same size, although my room features a large window into the Living Room that I had covered with opaque material so that it wouldn’t feel like a fishbowl.

Form follows function—that’s how the rule goes. But, in an office space, the opposite also holds true. When building from scratch or completely renovating aren’t options, you’ve got to make the space you have work. Thankfully, in our office, we’ve been able to incorporate all of the settings we need to be both comfortable and productive.

We hope you enjoyed the virtual tour of our office and hearing the rationale behind its layout! How is your space organized? We’d love to know what’s worked well for you (and what hasn’t)!