Why the Mystery Oreo is an Absolutely Genius Marketing Tactic 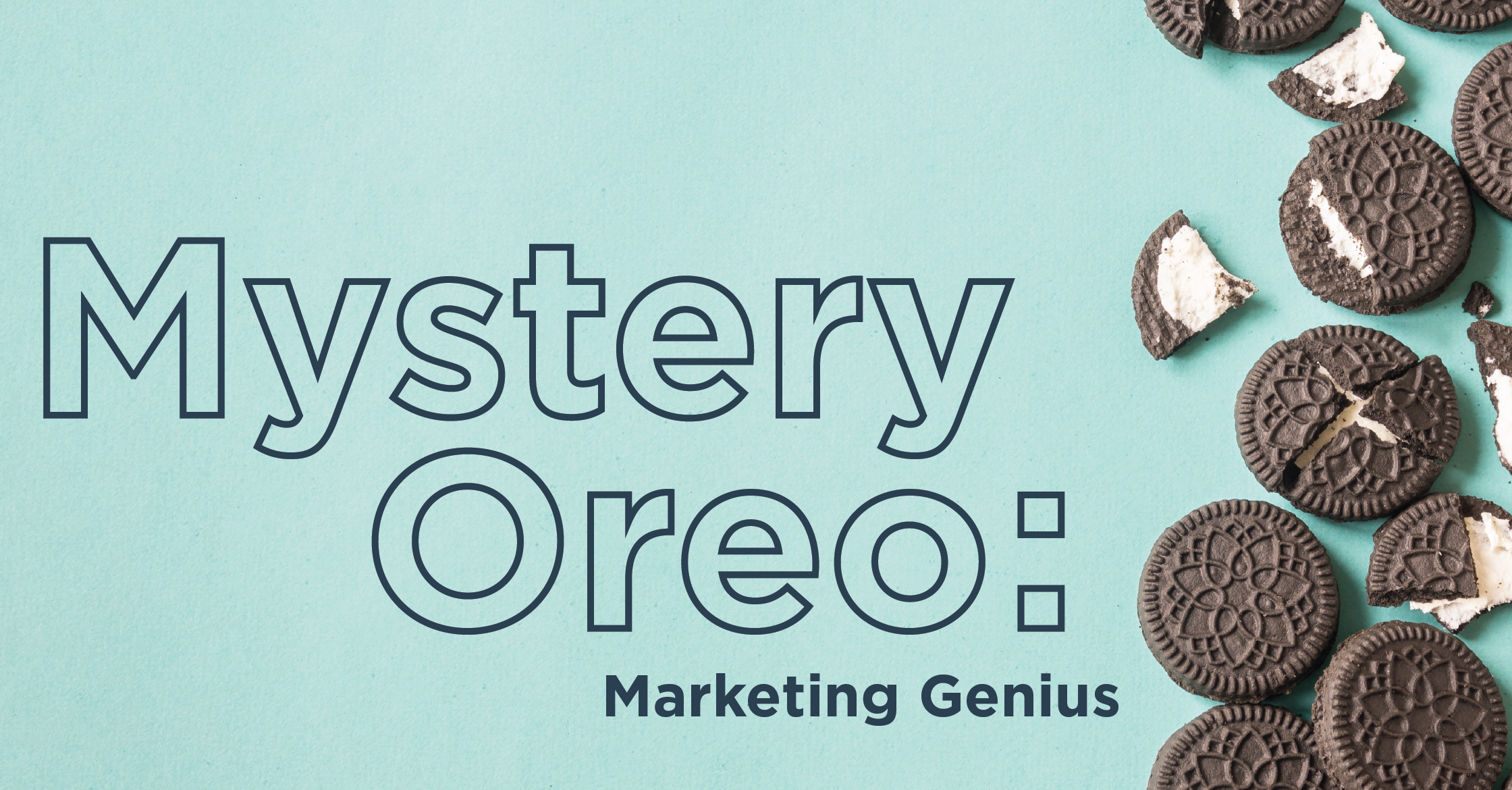 No, I’m not one of those people who are above eating Oreos. You know the ones. They talk about the fat and calories in an Oreo with disgust. Then they choose kale chips or avocado pudding instead. (Or they have found a way to directly consume the feeling of sadness.)

I’m not one of them, though I am a little bit in awe of them. The reason I don’t buy Oreos is not necessarily based on my knowledge of nutrition (or lack thereof). It’s this: I know that if I buy a box, I will consume at least three-fourths of it in one sitting. I may not have much self-control, but at least I have enough to leave the box on the shelf at the grocery store.

But one fateful day, just a few short months ago, I broke my cardinal rule and did buy a box of Oreos. Specifically, a box of this year’s Mystery Oreo.

And as I—and the whole office—have gotten caught up in that mystery, I’ve decided that the Mystery Oreo is one of the smartest marketing gambits ever.

Oreos are delicious. I think we can all agree. (Even my coworker who “isn’t a sweets person,”—brb, rolling my eyes—tried a Mystery Oreo without complaint.)

So, we’ve established, scientifically, that Oreos taste great and everybody likes them. However, some people try not to buy them even though we like them. Oreo has a group of consumers that do say, “To hell with it! I’m buying Oreos!” (they’re consuming the over 40 billion Oreos that are produced each year), but Oreo wants to sell even more Oreos than they can get that diehard group to buy.

So, what do they do?

They create a mystery so intriguing that us Oreo avoiders can’t help ourselves. Then they tack on a $50,000 prize to sweeten it even more.

Oreo pulls out all of the stops for this annual Mystery Oreo campaign. This year, celebrities, social ads, and even the Amazon Alexa (you could ask her what’s new with Oreo) were promoting it. People were getting involved on social media, sharing their guesses and even taste-testing videos. And the Mystery Oreo got plenty of press, as always. A regular Oreo may not be newsworthy, but the mystery flavor of the year? Heck yeah, give that some airtime.

Seeing all of this chatter made me think, “Huh, sounds fun.” Then I saw the box in the store and thought, “Huh, I think it would be cool to guess the flavor as an office.” It wasn’t just about an Oreo; it was about an experience.

And the experience didn’t just last a few minutes, while we were taste testing. It’s spread like wildfire, taking over our conversations. Once we decided on our guess, we set up a Slack reminder to vote on the daily at 9 A.M. Yes, even on weekends. We were invested. We were talking about Oreos constantly. We were making plans for how we were each going to spend our cut of the 50K.

The Marketing Magic Behind It All

To vote for the Oreo, we had to give Oreo (more accurately, Mondelēz International) our email address. And we could ever-so-easily sign up for regular Oreo emails in the same fell swoop.

We didn’t only vote once; Oreo encouraged each of us to vote daily. Plus, it incentivized us to share messages about the Mystery Oreo on our social media accounts to win additional sweepstakes entries. This kept Oreo top-of-our-minds for weeks on end. Every time a clue was released, it drove us into a tizzy all over again. We were filled with excitement because we’re geniuses and each clue only confirmed our collective guess.

Before, Oreo was a delicious cookie to me. Now, it’s an experience. It’s fun with my buddies at the office. It’s excitement about the chance to win some cash for doing virtually nothing. (Spoiler alert: We did not win.)

This whole Mystery Oreo deal is smart marketing because it’s enjoyable. It’s not underhanded or sneaky. It’s painfully obvious that this is a way for Oreo to sell more cookies. However, Oreo isn’t doing this just to sell a bunch of Mystery Oreos. You don’t even have to have proof of purchase to vote. They’re extending their brand reach, giving people a positive association. I mean, hey, even if you don’t win the cash prize, you still got to eat some cookies. That’s a win, in my book.

The Oreo brand didn’t hold a ton of meaning for me before. Now it’s fun, it’s exciting, it’s even a little…mysterious. (Just a little because it was pretty obvious all along what the mystery flavor was.)

Now that Oreo has got me started buying their delicious cookies, they’re hoping I’ll never stop. And, sure, I’ll buy another box for the office next year, but the jokes on Oreo. I’m above that kind of mindless bullsh—

Wait. What’s this box of Oreos doing next to me?