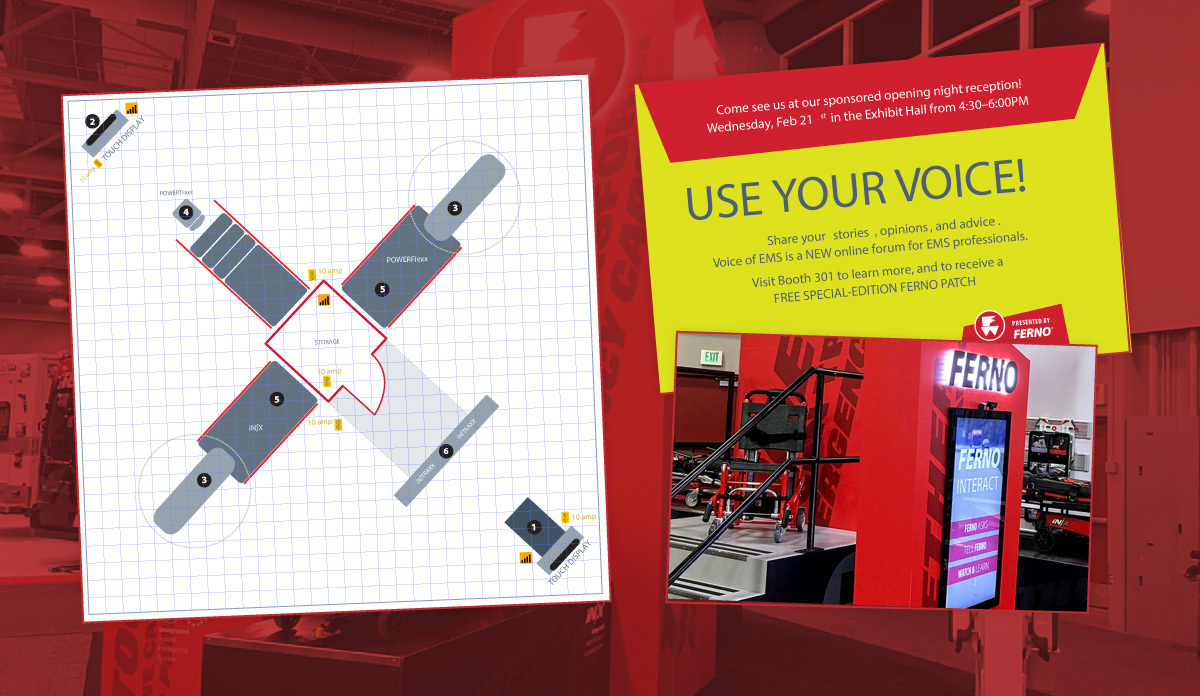 If there’s an Emergency Medical Services (EMS) convention, conference, or expo going on, Ferno EMS will likely be there.

Ferno, the leading global provider of emergency pre-hospital patient handling equipment, attends trade shows at many EMS industry events across the nation. Exhibiting at trade shows allows Ferno representatives to engage directly with potential customers as well as gather valuable feedback from the EMS community as a whole.

When competing for visitor attention in packed trade show halls filled with hundreds of businesses hoping to network, build brand engagement, and generate leads, it’s vital to have a booth that is inviting to visitors. Ferno’s booth, which had been used for many years, was not engaging, didn’t showcase Ferno’s newest products well, and wasn’t in keeping with Ferno branding.

“Our old booth was not an accurate representation of where we stand as a brand,” said Jason Wender, Senior Director of Sales and Marketing at Ferno. “It was not reflective of our new brand offerings and didn’t offer a great experience for guests.”

In addition, the booth was time-consuming to put up and tear down and expensive to transport from venue to venue.

For help concepting, designing, and producing a new booth, Ferno turned to 2 Fish Company. Our team has been working with Ferno since 2014.

“We wanted a partner that understood our marketing plan and goals and knew the EMS industry well, ” said Jason Wender. “We chose 2 Fish Company because of our strategic partnership and the team’s experience within the EMS space.”

Our first step was to map out Ferno’s goals for the new booth.

Ferno’s main objective was to increase engagement by providing a more inviting, interactive experience for guests. The Ferno team was specifically interested in incorporating an interactive touchscreen system. They also wanted a display that could be transported more easily, set up and torn down more quickly, and that was modular in design so that it could be adapted for use in exhibit spaces of various size.

Our team reached out to several trade show exhibit building companies to determine which could offer capabilities that fit Ferno’s needs. Once we chose a company, we began concepting the booth. After half a dozen iterations of booth design, we established a final concept.

The building process began in November 2016, and the booth was completed in January 2017.

In the new booth, the Ferno color palette – consisting mainly of red, white, gray, and black – and other brand elements featured prominently. The architecture of the booth was developed with simplicity in mind but incorporated Ferno shape language. Distinctive, angular shapes, like those seen in graphic novels, are frequently used in Ferno marketing materials to convey intensity, movement, and energy.

We designed the booth to be reminiscent of an interactive museum display, with a focus on allowing visitors to set their own level of engagement as they explored it. The main interactive features were two touchscreen kiosks. We created an interface that booth visitors could easily navigate to find answers to their questions about Ferno products, complete surveys, and enter sweepstakes to win Ferno products. We also mounted cameras on top of the screens so that visitors could take selfies. When visitors submitted their email address to receive their photos or enter sweepstakes, Ferno could further engage with them about Ferno products that could serve their EMS equipment needs. We used a software called IntuiFace to program the 24 1/2″ by 40″ TPK America display screens.

Prior to the first deployment of the booth, our team developed a troubleshooting document that Ferno employees could use to more effectively set up and operate the touchscreen system without needing to wait for direct 2 Fish Co. assistance.

For further visitor engagement at trade shows, Ferno representatives in the booth would be able to act as guides and educators, offering information and hands-on product demo experiences to those interested. In the new booth arrangement, we included space to feature four of Ferno’s main products, with plenty of room for multiple product demos at a time.

The displays for the four main products were constructed to make products more visible and show off their features in a unique way. A short set of stairs was created for demonstrations of Ferno’s stair chair. A wall was built to show off Ferno’s modular storage system that secures EMS supplies and equipment inside ambulance cabins. Two branded display tables were created to show off two of Ferno’s ambulance cots.

The interactive touchscreens and product demo areas surrounded a giant tower at the center of the booth. We designed the 16-foot structure to catch the attention of trade show attendees from afar. Hollow inside, the tower provided plenty of storage space whereas the old booth had none.

We chose the main red from Ferno’s color palette for the tower and added the Ferno logo button at the top of each of the tower’s four sides for quick brand recognition. The large buttons were backlit for further emphasis. The sides of the tower featured a Ferno “together” statement. Ferno frequently uses “together” statements, such as “together we can transform the delivery of care,” to communicate its passion for working with EMS professionals to improve the safety and performance of emergency care.

As requested, we created the entire booth to be very flexible, allowing setup of booth components to be customized based on Ferno’s needs and space allocation for each specific trade show.

“There are no other trade show booths like it in our space, “said Jason Wender.” Not only were we able to create an amazing experience for guests, but the booth is easier to assemble and tear down than the old one, which controls costs.”

The booth was officially launched at the EMS Today trade show in Salt Lake City, Utah, in February of 2017.

“Everyone was really excited about the new and out-of-the-box design,” said Lisa Talarczyk, Creative Lead at 2 Fish Co. “Attendees could easily make their way through and find the information they were interested in.”

Since its first implementation, the booth has been successfully deployed at three trade shows across the country in spaces ranging from 20′ x 30′ to 30′ x 50′.

Ferno, with support from the 2 Fish Co. team, continues to monitor engagement with and data gathered from the interactive touchscreen system. Based on this information, we are able to update screen content and design to achieve more favorable results. For instance, the first screen programs included a long list of survey questions on one page. Once the question list was streamlined, a higher level of survey completion was observed.

“We’re really pleased with it,” said Jason Wender. “It generated more excitement than our booth in past years and has been a success.”

He added: “Working with 2 Fish Company on this project was a great experience. It was a partnership with a lot of back and forth. They were forward-thinking, strategic, and understood our goals.”