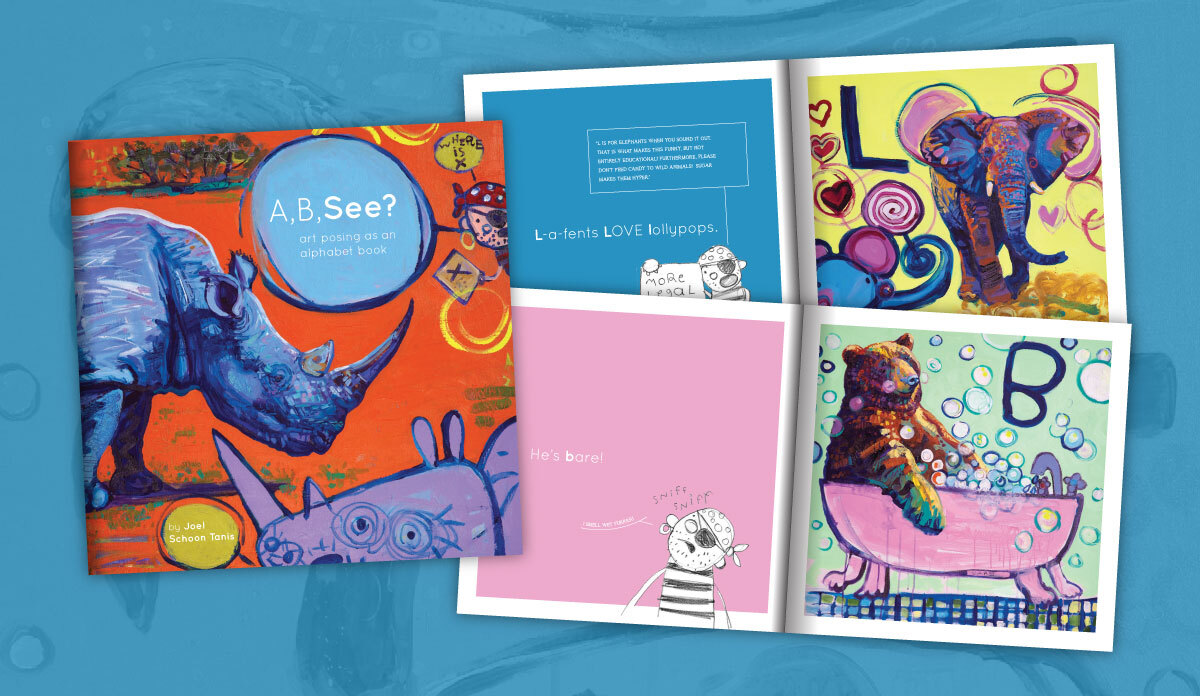 Joel Schoon-Tanis is a celebrated artist who’s known for his colorful, whimsical painting style. Joel is based in Holland, Michigan, but has shown his work around the United States and as far away as Kenya. He has contributed to more than half a dozen children’s books as an illustrator and author. He also created and hosted the award-winning children’s television show “Come On Over!”

The 2 Fish Company team has known Joel for many years, and we’re always ready to get roped into his fun ideas. In 2014, Joel entered a collection of paintings called A, B, See? into ArtPrize®, an open, independently-organized international art competition and festival held annually in Grand Rapids, Michigan. The massive exhibition of twenty-six 30″ x 30″ canvases featured an acrylic painting of each letter of the alphabet. Joel’s singular style, in which he juxtaposes a childlike perspective with realistic images, resulted in a bright, amusing new take on the traditional ABCs. (For instance, did you know that “L” is for “L-a-Fent”?)

After a warm reception at ArtPrize, demand grew for the A, B, See? collection to be turned into an art book.
“People kept asking if this was going to be a book,” said Schoon-Tanis. “Honestly, it had never crossed my mind! But it made total sense as a way to share my art and create more revenue from a collection that was already complete, so I started looking into it.”

Joel enlisted our team’s help to bring the book to life.

“I went to 2 Fish Co. because I trust Scott Millen and I like his art direction. I have done enough work with publishers, as opposed to this self-publishing situation, that resulted in me being disappointed with the design. I loved picking my own designer. I also knew that 2 Fish Co. had the knowledge to help me through the printing process—which was foreign territory to me.”

So, we got to work! With Joel’s artwork as the basis of the book, our role was to transform the collection into a finished product, integrating the story Joel had written. The prose was simple, but the A, B, See? illustrations were complex. Though perceptually easy to understand, the artwork contains a lot of details that contribute to the storyline. We endeavored to keep the book simple and easy to read while maintaining an emphasis on Joel’s art.

As we laid out the book, Joel and our team collaboratively realized that one of the characters could be “pulled out” of the artwork to provide a secondary storyline. This character, a comically disruptive pirate from the “R” page (get it?), contributed more narrative and adventure to A, B, See?, bringing it beyond a fun and beautiful art book.

“Joel’s vision for the book was that it would be a child’s reading primer that adults could enjoy as well,” explained Scott Millen, Managing Partner and Creative Principal at 2 Fish Company. “For a child, the original artwork and storyline were fascinating as is. The pirate character added an element that will amuse people of all ages.”

Figuring out how to integrate the character into the layout without distracting from the main storyline took some time. Joel and our team decided on an unobtrusive pencil-drawing look, which also made it appear that the pirate had been drawn on the pages by a child. Joel then created hilarious commentary for the pirate that also serves to clean up any educational messes. For instance, he sets the record straight when he explains that the “C-cow” on the “C” page is actually called a manatee, though some “land-lubbers” refer to them as “sea cows.”

“Once we landed on that pirate character, everything else became clear. It really is evidence of the collaborative spirit that pushed this project to be so much more interesting and fun than it would have been if it were just a collection of art,” said Joel.

The final book was 9” x 9” and 56 pages long. The 2 Fish Co. team managed printing, and soon enough we had the books in hand.

“The book turned out fantastic, and people love it,” said Schoon-Tanis. “It looks great, reads well, and represents my art in a great way. My expectations and goals for the book were exceeded, and it’s no accident that I have used 2 Fish Co. for multiple projects since then.”

He added: “Working on this project with 2 Fish Co. had two elements. On one hand, I could go to them for things that don’t fall in my skill set and ask for their expert advice. The more important interaction, for me, was having a sounding board to figure out how to make this the best art book that it could be.”

Since A, B, See?, we’ve designed every one of Joel’s books, including As Real As It Gets, by Joel, Amanda Barton, and Natalie Hart; 40: The Biblical Story Interpreted by Joel Schoon-Tanis; and Lulu and the Long Walk, illustrated by Joel and written by Dan Haseltine. We can’t wait to see what he dreams up next!

Purchase your own copy of A, B, See? here!