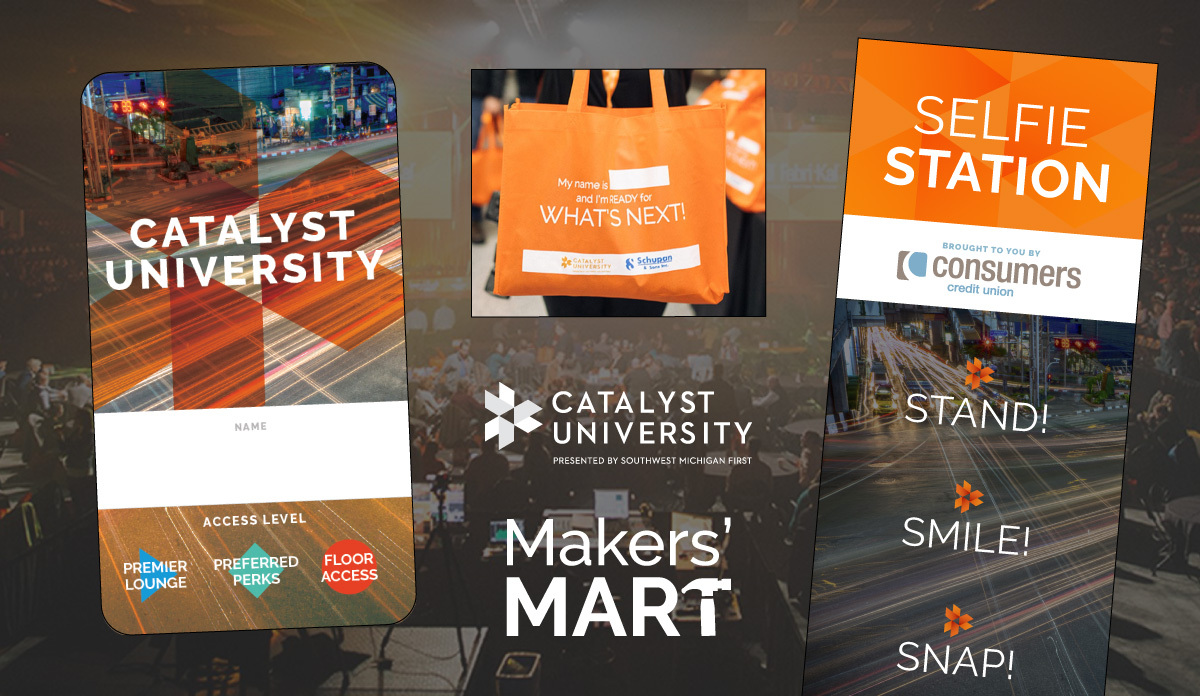 Picture this: an event center filled to the brim, the buzz of anticipation in the air, a well-known speaker on the stage. No, it’s not a TED Talk. It’s Catalyst University.

Catalyst University is a leadership conference held annually in Kalamazoo, Michigan. Economic development agency Southwest Michigan First (SMF) has presented the event, which is designed to inform and inspire area business professionals, since 2009. World-class speakers and an energizing atmosphere attract thousands of eager attendees from the region each year.

For Catalyst University 2017, SMF sought to draw a larger crowd than ever before, curate new and exciting experiences for attendees, and put on the event more efficiently and sustainably.

“We had set a lofty goal of increasing attendance by several hundred people in 2017,” said Heather Baker, Managing Partner at Southwest Michigan First. “So, all of our marketing prior to the event needed to be excellent to attract attendees. At the same time, we were looking to plan the highest-quality experience possible for our guests.”

To reach these goals, SMF brought 2 Fish Company on board for holistic marketing and event support.

“We had been working with SMF since 2011, but had not yet provided this level of support for Catalyst University,” said Scott Millen, Managing Partner and Creative Principal at 2 Fish Co. “We were very honored to be asked to contribute to such an important event.”

“In looking for a partner for Catalyst University in 2017, we needed someone who could bring a multitude of skillsets to the table, from working with digital media and websites to print materials and video design,” said Heather Baker. “We also needed a team that was easy to work with, understood all of our project needs and deliverables, and could stay on or beat a budget. 2 Fish Co. has met those needs over and over again for us.”

Typically, a design agency working on a huge event such as CU would solely handle one or two aspects of event support. However, we were tasked with concepting, design, printing, installation, staging, and day-of-event support, acting as a one-stop shop. We were also in charge of developing all marketing materials needed to promote the event in addition to all event collateral and signage.

“There is a lot that needs to happen for a conference for 2,500 people,” said Heather Baker. “Planning typically takes over a year. It starts a little more slowly, but builds up as we begin to develop deliverables.”

With a long list of projects to accomplish, the team got down to work in August of 2016, six months out from the event.

Our team’s first order of business was to gain an understanding of the Catalyst University brand. The objective of CU is to develop leaders of all ages and backgrounds. Messaging is vibrant and engaging and features an exciting and energetic tone. It’s also informative and communicates how attendees will grow through participating in the event.

The theme for CU 2017 was “Next.” All speakers focused on the idea of “what’s next” for education, for entrepreneurialism, and more. While most marketing materials reflected the main CU brand, we were able to integrate “Next” branding elements in many deliverables. We often communicated the theme through the motif of busy intersections or crossroads. The CU symbol is reminiscent of a crossroads itself, so we were able to integrate that as well.

Once we were well versed in all things CU, we designed the CU website around the “Next” theme. The site had to be updated throughout the six month time period. After the event, the site required a re-design to reflect the theme for the following year.

In the months leading up to the event, we continuously crafted marketing materials, such as billboard designs, promotional print materials, social media graphics, and eMail blasts.

Event signage was another key deliverable. We produced about ninety signs, both print and digital, for on-site decoration and wayfinding purposes.

We developed event collateral, ranging from custom-branded seat cushions and LED pens to lanyard cards and special-edition beer label stickers, and CU-branded merchandise such as T-shirts and coffee mugs.

We worked with a professional event staging company, Captus Creative of Grand Rapids, Michigan, to provide video and graphic assets for various staging elements such as rolling screens, as well as LED panels and LED ribbons.

As we prepared all of the deliverables for CU 17, our team also produced a special hybrid issue of 269 Magazine. The magazine, released bimonthly by SMF and produced by our team, was combined with the CU program for the event.

When the day of the event arrived, our team was on site at Wings Event Center to provide support.

“The event center was packed,” said Adam Rossi, Creative Lead at 2 Fish Co. “The community has really embraced the event, and I think everyone was blown away by the production quality and energy in 2017.”

“It was our highest-attended event to date,” said Heather Baker. “We exceeded our attendance goal. The experiences were varied and exciting for guests. The best outcome was that registration for 2018 took off and outpaced the prior year by far. We have to say that that was because attendees enjoyed their experience so much in 2017.”

According to surveys collected by SMF after the 2017 event, 94% of attendees planned to attend in 2018 and 97% would recommend the conference to a friend.

“It was an absolute pleasure working with 2 Fish Co. on this event, from the pleasant day-to-day interaction to the extra moral support up to the last minute,” said Heather Baker. “The 2 Fish Co. team easily integrated into our team and understood our needs.”

As we continue to support SMF’s yearly production of Catalyst University, our team is excited to apply the knowledge we gained in 2017 as well as develop fresh, new features.